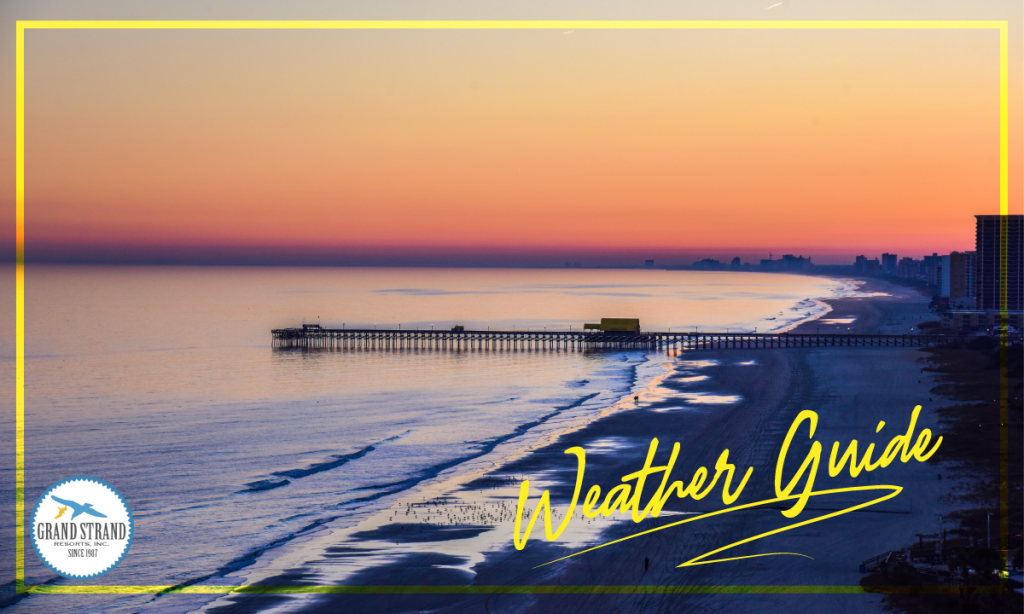 Summer thunderstorms are common in North Myrtle Beach, with June through September seeing the highest precipitation in the form of brief, but intense afternoon showers. Average daytime highs range from 83°F to 91°F and average night-time lows hover near 70°F.

Winter months can see a bit more variance in temperatures, and ocean breezes begin to pick up. While average daytime highs range from 57°F to 61°F with nighttime lows around 38°F, brief cold snaps may see some winter days only reaching the upper 40s. On the other hand, the occasional winter warm-up can find temperatures peaking in the lower 70s in the afternoon.

The traditional beach season in North Myrtle Beach runs from late-April to mid-October. For the clearest, cloud-free days, aim to visit between September – December. However, if you value quantity over quality, be aware that the longest day is June 21, and the shortest is December 21. Sea-surface temperatures linger in the lower 80s until early-mid autumn. Winter sea-surface temperatures average just below 68°F.

Landlubbers will be glad to know that golfing remains in season all year long. The very best times to visit North Myrtle Beach for general outdoor recreation are mid-April to late-May and again from late-September to late-October. On average, there are approximately 215 sunny days per year in North Myrtle Beach. July is the hottest month overall, and January is the coldest.

What month has the best weather?

While North Myrtle Beach sees the most visitors during June & July, many locals prefer the warm weather of the Fall (September).

Will my vacation get rained out?

It’s very rare that the rain lasts for very long in North Myrtle Beach. Many rainstorms pass in 30 minutes or less, leaving you cooled down with plenty of more beach time to enjoy!